“It’s not just some arcade game you can start up on the spot, you
know?” That comment on role-playing games has stuck with me ever since.
I remember thinking in response, “Well, why not?”

The default assumption with the hobby, of course, is the
everlasting campaign, taking place over years, often with at least
three players and a GM meeting at regular intervals. That, indeed, is
no arcade game to be started up and played because you and a friend or
two have a couple of hours of free time. 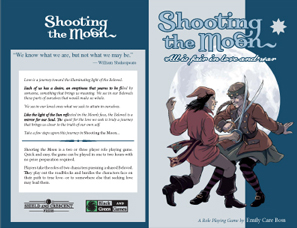 On the other hand, once one gets past the default assumption
there are in fact role-playing games that can be started up on the spot
and played in one sitting. Breaking the Ice by Emily Care Boss was one.
She’s struck again with Shooting the Moon, in many ways a more elegant
and streamlined offering.

Breaking the Ice is a game about two people going on three
dates and falling for each other. Shooting the Moon, on the other hand,
is about two Suitors competing for the affections of a Beloved. It is
this competitive element that gives the game zest, and a well-defined
and clean play procedure that enhances the fun of both the competition
and the story.

Before I dive deeper into the substance, let me back up a
little for the obligatory style review. I am not the best judge of
layout and visual presentation, but the book looks fine to me. I really
liked the illustrations by comic book artist Jenny Manley Lee, and the
use of boxes to delineate differences between two and three player
games and play examples worked well. At a little over 40 pages
including illustrations the book is skinny and staple-bound, but seems
sturdy enough and has survived abuse such as folding backwards.

Back to your regularly scheduled substance review: As you may
have guessed, I have played and like Breaking the Ice. My motivations
for buying the game had a lot to do with the “arcade RPG” impulse I
mentioned at the beginning. Breaking the Ice could be played with two
players, with no GM, and there was no prep or long-term commitment
involved. Nevertheless, there were some shortfalls in the play
experience that I feel have been satisfactorily resolved in Shooting
the Moon.

The first of these is competitive and dramatic pressure. My
impression from playing two games of Shooting the Moon was that the
game is not truly competitive, despite its basic structure. Rather, the
competitive frame drives the dramatic tension for a more satisfying
story.

The spirit of competition, and the driving force of the story, come
from the Hurdle rule. Players take turns being the Active Player,
framing the scene and describing their Suitor’s advances toward the
Beloved. (Shooting the Moon can also be played with three players, with
one player playing the Beloved, but both my games were two-player,
Suitor-only games.) The player of the other Suitor, the Opponent,
introduces the Hurdle when the chance presents itself, throwing a
wrench into the Active Suitor’s plans. The Active Suitor has a chance
to respond, and the two roll against each other for the outcome of the
scene and to gain–or keep the Active Player from gaining–points
towards the goal.

For instance, one of my two games took place in the Beast
Hunters setting, with two Chel’qhuri tribesmen competing to be chosen
by a powerful woman in the tribe to breed with her. My Suitor,
Thundercloud, staged a raid of a caravan by himself, hoping to prove
his cunning and fierceness. The Opponent then narrated how Thundercloud
was outnumbered by the unexpectedly well-trained caravan guard. In
response I narrated the Beloved herself, Pineflower, coming to my
Suitor’s rescue. The players each try to take the story in their own
direction, resulting in a lot of back-and-forth and unexpected twists
and turns.

This, I felt, was the missing dash of spice in Breaking the
Ice. Too often there the play devolved into “let’s squeeze as many
successes out of the dice as humanly possible” without regard to pacing
or, more fundamentally, fun. The complete convergence of interest
between the players toward a happy ending sometimes made the game lag,
especially if the players were not honest about their preferences and
desires. (There’s got to be some kind of metaphor there.)

In Shooting the Moon, on the other hand, the back-and-forth
between the players drove the conflicts and the story forward, with the
clear and limited procedure for doing so helping the focus and pace of
the scene. This point leads to the second great improvement in Shooting
the Moon, namely the clear procedure.

Every scene in Shooting the Moon has a set procedure of scene
framing, hurdle presentation, and resolution. Breaking the Ice had
procedure, as well, but a turn in Breaking the Ice could be pretty much
all over the place as players worked to maximize successes, something
that, as mentioned above, could seriously harm the pace of the game.

In Shooting the Moon each scene can only be about one Hurdle, or
central conflict, and once the Active Player makes three responses to
the Hurdle the players must roll to resolve the scene. There can be two
more steps to the process if the Active Player loses and wants another
chance, but those steps, too, are finite.

The restrictions to the three responses by the Active Player,
furthermore, help to keep the scene tightly focused around the three
protagonists. Each response must involve an Attribute or Trait of the
Suitor or Beloved, or flirtation between the Suitor and Beloved. This
centers each crisis squarely around the characters, their interactions,
and previous events in the story.

One example of this is from another game I played about a king
and his best knight competing over a widowed noblewoman. The Hurdle
thrown in King Artegal’s way was that Sir Ciel was about to help Lady
Ariannaid onto her horse. My first response was that Leland, Artegal’s
Person Trait and Ciel’s rival, spoke to Ciel on the way, distracting
him. (Suitor Trait) The second was that Artegal and Ariannaid brushed
hands as he escorted her to her horse, making her blush. (Flirtation)
The third response was that he knelt down and locked his hands together
for her to use as a mount step, surprising onlookers. (Suitor
Attribute: Dignifed, but humble to his friends) In this way, the rules
provided for meaningful interactions and an interesting story.

The setup for the climactic scene similarly draws from the
characters and preceding events for a dramatically appropriate setup.
Each player narrates an element of the scene for each goal point that
he or she gained during the earlier turns. Each scene element must
involve Traits, Conflicts or Obstacle, flirtation, or a background
description. (Not Attributes, however. The omission for the climactic
scene serves to place more emphasis on closing the story by focusing on
issues and preceding events.)

In the Chel’qhuri game mentioned earlier, the two Suitors were
about to have a showdown with an enemy tribe to regain control of
tribal lands. As part of the setup, I narrated my Suitor hiring
mercenaries with the loot from the successful caravan raid at the
beginning of the game. It was a small thing but gave quite a sense of
closure, and was something I was unlikely to have come up with if I
hadn’t been racking my brain to make use of Suitor Traits.

Thus far I have compared and contrasted Shooting the Moon
extensively to Breaking the Ice, but of course Shooting the Moon stands
alone without the earlier game. It’s just that comparing these two
games by the same creator on a similar subject served to highlight what
I felt were its two great strengths.

Something else I liked about Shooting the Moon was its system
for collaborative character generation. It seemed to serve two
seemingly conflicting purposes. First, it gave all the players a stake
in all characters since everyone contributes to each character. This
served to mitigate the competitive pressure, making it good-natured
rather than heated, since these were all our characters in a sense.

Second and on the other hand, the chargen process itself was
competitive at some stages. This was especially true of the Attributes
stage, where in a two-person game players take turns modifying their
own Suitor’s Attributes and the other Suitor’s. This was how my
Chel’qhuri Suitor ended up with “Handsome but cheerless” and “Lowly of
birth but discontent,” while the other Suitor turned out to be
“Surrounded by friends but mostly due to his birth” and “Blessed by
ancestral gods but arrogant.”

All this is not to say I have no bones to pick. The first is that the
game is a little too random. The dice mechanic compares the highest die
in opposed rolls rather than totals or successes. Since it uses
six-sided dice, this means that a one-die difference statistically
means little. This in itself may be a feature rather than a bug, but my
complaint is that there is little the players can constructively do to
manipulate those odds. The story that the players create in the
process, as stated above, may be fun, but I felt there was little I
could do to better my odds when it came to the outcome.

At least, that was my impression of the two-person games I
played. A three-player game seems to have meatier options, leading me
to conclude that this is the default for Shooting the Moon. I look
forward to playing a three-person game and seeing how the tactical side
of it differs from the two-way game.

Another and related complaint was the tiebreaker rule for the
two-person game. If I correctly understand the grammatically incorrect
instruction at the middle of page 21, it comes down to the two Suitors
comparing just one die roll against each other, making it a completely
random exercise that disregards the earlier tied roll or even the
Active Player’s negligent one-die advantage. This did nothing for my
sense of tactical control over the outcome.

Overall, I found Shooting the Moon to be a simple and quick game with a
lot of punch. Playing it can, really, be as easy as starting an arcade
game, but with deeper results in terms of story–especially with the
rules to support it. I highly recommend it to anyone looking for a
short, painfree playing experience with high returns. It makes for a
decent one-on-one game, with some warts as mentioned above, but I
suspect that it would truly shine as a three-person game, which I look
forward to trying in the future.