John Kim gave me the link to a new Spirit of the Century campaign page, Dragons of the Yellow Sea, and boy is that cool or what! I read His Majesty’s Dragon and thought the idea of dragons in real life was cool, though the book didn’t grab me otherwise. But the thought of dragons on Jejudo… that’s just delicious. (And those sturdy, clever little island ponies? ‘Yum’ indeed for our scaled friends. 😉

John asked me about possible hooks and tropes for a Korean campaign set in the 1860’s,  though he is wisely unconcerned with historical accuracy. This post far exceeded LiveJournal’s max for comments, which is why I moved it here. You know what they say about being careful what you wish for… 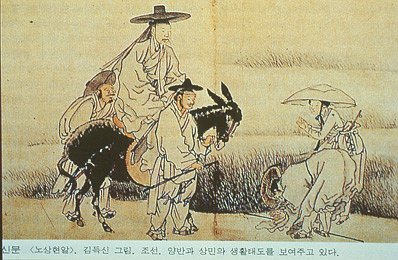 Yangban on donkey with Nobi attendants, commoners bowing by the roadside

Class friction would be one interesting dimension for a Chosun campaign. (Image source here) There was the nobility, the Yangban, the commoners, or Sangnom (Yangin if you want to be polite), and the slaves, or Nobi (Jongnom to be insulting). Nobi are more akin to lifetime indentured servants than slaves in the antebellum South, since Korea had no plantation system and land ownership was closer to feudalism: The peasant farmers worked the lands and paid the landlord in addition to paying their own taxes.

In addition to taxes paid with rice or other commodities (by the nineteenth century paying in currency was fairly common as well), commoners also paid with labor, working on major state-run constructions like fortifications, and could be drafted into the army. These were all sources of widespread misery, as you can imagine: Overworked peasants dropped like flies from starvation and contagion. If you had money you could pay off the labor tax with cash, and the steady rise of rich commoners was another source of social pressure. Heck, some commoners were actually buying impoverished noble families’ Jokbo (family records) to pass themselves off as nobility–effectively buying stature with cash.

The indentured servants, the Nobi, worked in the noble households and could be bought and sold. An individual or family could also have their free (common, or even noble) status stripped away and become Nobi, usually because they were associated with some major crime like treason. The archetypal story is one where a nobleman is accused of treason and is messily executed, then his entire family are slaughtered or sold into servitude. This status of servitude was hereditary, so this meant effective annihilation for the whole family.

So there are some interesting social pressures in regards to class. There’s the traditional oppressive class system, perpetuated for, oh, easily a thousand years. There’s also resentment building steadily against it, with the growing recognition of the horrible iniquities and the rise of some rich commoners. For the Yangban the new development is a source of alarm and righteous indignation; for the Yangin and especially the Nobi the old system is a source of growing resentment. The historical details are unimportant, but these kinds of opposing pressure could make for some really meaty conflicts. Korea had its share of peasant and slave uprisings, particularly when times were bad with famine and such.
Maybe dragons played a role in such conflicts as well?

You could bring class into play in a number of ways, one of which is the issue of class and dragons. What class of people ride dragons? Many Yangban considered physical exertion beneath them. Chosun was a country that consistently looked down on martial pursuits in favor of scholarly ones, so soldiers, even noble ones (Mushin), were considered inferior to the bureaucrat scholars (Munshin). Still, “Yangban” does mean the “two Bans”–the Munban, which is the bureaucracy, and the Muban, which is the military. Overall I’d imagine the noble-born officers who passed the relevant state exam (the Mugua) would be the most likely candidates for dragon riders.

Of course, dragons can’t be expected to give a fig for human conventions, so I can definitely imagine the pesky creatures choosing commoners or even some slave who was sweeping the yard or carrying loads. Or a bureaucrat who must now lower himself to officerhood. Or even–horror of horrors–a woman! It would actually be better if it were a commoner or slave woman. I can imagine many a noble lady fainting dead away at the idea of her daughter running around with men and engaging in sweaty physical exertion.

The status of women was, well, pretty bad. They couldn’t inherit, had no right to leave their husbands… hell, even remarriage was frowned upon for widows. This was worse for noblewomen because they were more tightly bound by repressive moral expectations. Common women had more leeway, but overall it was pretty severe.

At least if you were born noble it was unlikely you were illiterate, though your education was limited compared to noblemen. Hangul, the letters created for the Korean language, was (and is) immensely easier to learn than Hanja, the Chinese characters used by the elite, so women turned to Hangul for self-expression. The bureaucrat elite looked down on Hangul as Un-mun, the woman’s letters, but many examples of Hangul literature by Chosun noblewomen survive and are highly regarded today. 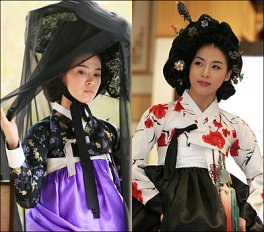 The most highly educated and accomplished women in Chosun were probably the Kisaeng, or courtesans (image from here). These weren’t noble or even common women but actually indentured Nobi, and belonged to the state. They were also instructed in music and dance, and many were superb artists and poets. They were a staple at noblemen’s parties, pouring drinks, dancing, improvising poetry. Think high-class prostitutes from other cultures. These ladies were pretty similar.

One recurring trope in comical Korean folklore is the plucky, worldly, clever commoner and the boorish, sheltered nobleman. That might be fun to work into the characters, kind of a two-man comedy routine coupled with social commentary.

Another recurring theme throughout history is that the central government is oppressive and uncaring of the people, so the people had damn well better rely on themselves if they want to get anything done. Yet reverence for the king’s person was almost absolute unless he was really, really tyrannical. Mostly it was the Yangban who bore the brunt of resentment.
The local government was sometimes good, sometimes bad, but the central government was almost always seen as corrupt and untrustworthy. 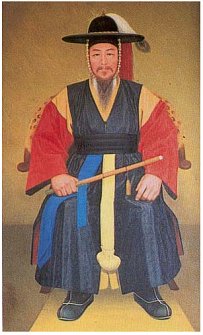 Yet another recurring theme is that the really good guys will become targets of the jealous Yangban, who will stop at nothing to discredit and ruin him. During the Japanese invasion navy commander Lee Sunshin was a hero to the people and to his men, so much so that he was arrested on unfounded charges, tortured, imprisoned, then cleared of charges, stripped of his rank, and set free. Then the war started going to hell and he was recalled to his post, where he proceeded to smash the Japanese into the sea and die heroically in battle.

This is a fairly typical hero’s tale in the Chosun era; there’s no stigma for a hero to be accused by the state, since there’s no trust in government. If anything it adds to his heroic status, because he’s made powerful people nervous. The hero’s tale also doesn’t end in revenge and bloodbath like it might in Japan. Yes, the hero was horribly wronged; no, he’s not going to take revenge, rather he’s going to prove his righteousness through heroism or cleverness, which will shame the person who wronged him. The hero will be triumphantly restored if it’s a happy story, and die tragically or leave for greener pastures if it’s a sad one. Either way it’s society that will judge the villain, not the hero him/herself.

Korea never did share its neighbor’s fetish for swords, though they were commonly used. (Korean swords share a superficial resemblance to the katana but were actually very different, and were used differently.) The weapon with the greatest hold on popular imagination was probably the bow. (On a probably unrelated but fun note, check out the Korean Olympic team’s track record in archery.) Jumong, founder of the ancient kingdom of Goguryoh, is a prime example of a legendary marksman. So was Lee Sung-Kié, the founder of Chosun. 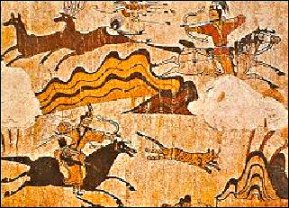 Archery from horeback was widely practiced, too. One advanced tactic was to whip around in the saddle and shoot backwards. Check out these hunters (image source here) from a Goguryoh grave. Archery from dragonback? The mind reels… in a good way…

Of course, there’s no need to dispense with more modern weapons, either. Remember, gunpowder was a Chinese invention, and Korea also received a painful lesson on the power of firearms when the Japanese used them in their sixteenth-century invasion of the peninsula. Within years the Koreans were firing back with guns of their own.

Regarding the traditional affinity with water, the king of the sea was called Yong-Wang, the Dragon King. There was also an ancient king (Munmu-Wang in the 7th century, 30th king of Shilla and the first king to unite the peninsula if you want specifics) who had his remains buried at sea so he could rise as a dragon and protect the peninsula from the marauding Japanese. His watery grave is a rocky outcropping in the Eastern Sea (or the Japanese Sea as it’s commonly known outside of Korea), about two hundred yards around. It’s called Sujung-neng, Underwater Grave, or Dai-Wang-Am, the Great King’s Rock.

Another important dragon in Korean mythology is Choyong. He’s one of the seven sons of the dragon of the Eastern Sea, who became the retainer of a 9th century king. Heck, maybe he was even a progenitor of latter-day dragons. Evidently he lived in human form among humankind, though.

The king (Hun-gang-wang, 49th king of Shilla) gave Choyong a beautiful wife, so beautiful that Yokshin, the spirit of contagion, became enamored of her and took on man-form (one version of the story says Choyong’s own likeness) to sleep with her. Choyong, coming home late at night, saw them lying together, but instead of getting angry he withdrew dancing and singing:

In my marriage bed

But what of the other two?

Once they were mine

But they were taken, so what can I do?

See what I mean about Korean stories not being big on revenge? 🙂 Yokshin was shamed by Choyong’s generosity and knelt before him, begging forgiveness. He swore he would never trespass on him again, and would run even at the sight of Choyong’s face. This is how Choyong’s likeness (image source here) became a ward against disease. Scholars say this stranger from the sea who rose high in court and showed such magnanimity in the face of his wife’s adultery was actually a seafaring Arab or Persian merchant (possibly a doctor?), but either way it’s a good story.

I notice I keep mentioning Japan, so here’s a brief rundown on cultural attitudes: The Koreans traditionally thought of the Japanese as savages, pirates and marauders with no culture or history. (They were wrong, fatally so, but when have neighboring countries ever lacked for mutual prejudice?) With China, the font of all culture and civility (yeah right), as Korea’s traditional patron, the defeat of China by Japan was a huge shock.

Also, the coastal dwellers in particular suffered from Japanese pirate attacks, so there was hostility going on in that direction, too. Then there was the invasion in the sixteenth century during which the whole country suffered. (Imjin Waeran, “the attack of the Puny People in the year 1592”) One common derogatory term for Japanese is Jjokbari, “footpieces,” regarding their distinctive footwear; another is Waenom, “puny bastard(s),” mocking their height.

Wow, that is one LONG post. I tried to tickle the imagination rather than give a history lesson–I’m note sure how well I succeeded.

6 thoughts on “Thoughts on Dragons of the Yellow Sea”